Here in mid-summer, a relatively short newsletter. First a bit about the Summer camp that took place one week ago, and apart from that a few exciting news about upcoming workshops with Rob Liberti and – Master Sam Tam.

Summer camp:
As you know, it was the first time I held a Summer camp despite numerous calls over the years. I had chosen to do it in my own home, and that meant that the number of participants had to be limited. Exactly as I wanted it. My focus was namely that it should be intense and personal, and to create a forum where real learning could take place. From the feedback during the camp, and since then, it seems I succeeded with that. All the students did really put in an effort through all 9 days. They were focused, positive and hardworking, while at the same time, there was room for lots of humor and laughs. Particularly the first weekend, where the theme was Pauchui (Chen Style Canonfist), was a new and challenging experience for most, since they hadn’t tried it before. The following 7 days had focus on the system of Master Sam Tam, and allowed for contemplation. From the Heart – thank you to all who participated! I can already now reveal that the Summer camp will be a recurring event! And I will also during the year do a couple of extended weekends where I will do these “housetrained” events. A direct and natural extension of the way I have been taught by my teachers. 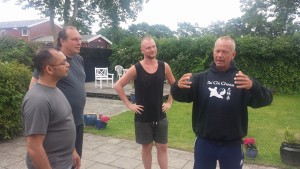 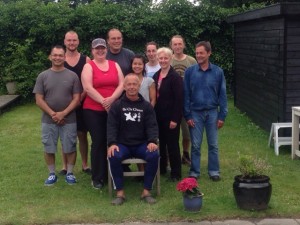 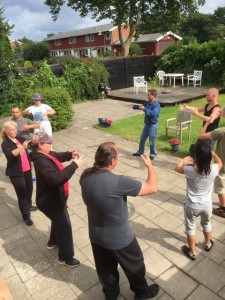 (Pictures from the Summer camp)

Workshops with Rob Liberti and Master Sam Tam:
One of my students have a keen interest in Dan Harden’s system. Dan is reportedly one of the few Westerners who has designed a system to build “internal power”. I’ve set up an arrangement with one of his topstudents – Rob Liberti – who supposedly are a good communicator and teacher.. Rob visits Denmark in the Autumn and will do a workshop from Oct. 22 to 23. More info will follow as all the details get settled.

As you know, master Sam Tam has paused for almost two years now with his otherwise normal routine for many years, of coming to Denmark twice a year and conduct workshops. Based on the fact that quite a few of my students have begun to visit Sam Tam in his home and receive teaching directly from him and that I as well have more and more students coming to me privately to receive teaching, I have spoken to Sam Tam about the possibility of him doing a very special event in Denmark. And he was positive about the idea, but it’s still on the drawing board and I will make a final agreement with him when I visit him in a few months. In its simplicity, the idea is that he will do a 3-4 day intensive workshop in my house, for a limited group (max. 12 students). The event will be “by invitation only”, which means it will not be an open workshop, but only for participants who already have a basic knowledge of his system. I think it will take place in May/June next year. If you are interested in the event, feel free to send me an email. 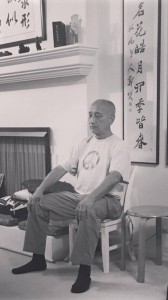 Workshops:
In the coming month, I will plan all workshops for Autumn/Winter 2016/Spring 2017 and I can already now reveal, it will be a very exciting year! Many workshops and courses – stick, fan, taijiruler, push hands, standing, Tuina massage, Qi Gong, etc. There are a few allready scheduled workshops in August/beginning of October, as follows: Aug. 27 (10 am – 2 pm) Body awareness and relaxation
Oct.   1 (10 am – 2 pm) Meditation

Private training and group sessions:
I have written previously that more and more students comes for private sessions. Recently, I opened up for group sessions – two to four students at a time. It has the distinct advantage when working with partner exercises that I can correct the students from the sideline while they practise together. Contact me if you would like to book private sessions.

All that remains is to wish you all a continued great summer!