Zheng Manqing (1902-1975) was born in Yongjia , Zhejiang Province . He died March 26, 1975; his grave is near the city of Taipei. Zheng was trained in Chinese medicine, tai chi chuan, calligraphy, painting and poetry. Because of his skills in these five areas he was often referred to as the “Master of Five Excellences.” Because he had been a college professor, his students called him “Professor Zheng.”

Zheng’s father died when Zheng was very young. Around the age of nine, Zheng was struck on the head by a falling brick or roof tile, and was in a coma for a short while. He recuperated slowly, and was apprenticed to a well-known artist, Wang Xiangchan, in hopes that simple jobs like grinding ink would help his health. Within a few years, his teacher sent him out to earn his living at painting. Zheng’s aunt Chang Kuang, also known by her artist’s name of Hongwei Laoren, was a well-known painter.

During Zheng’s childhood, his mother took him out to find medicinal plants and taught him the fundamentals of traditional Chinese herbal medicine. Zheng taught poetry and art in several leading colleges in Beijing and Shanghai and was a successful artist. At the age of nineteen, he was a professor of poetry at an esteemed art school in Beijing. Later in Shanghai, he became acquainted with influential figures including Wu Chang Shi, Cai Yuan Pei, Zheng Xiao Xu, Xu Bei Hong, and Zhang Da Qian.

In his twenties, he developed lung disease . Ill to the point of coughing up blood, he began to practice Taijiquan more diligently to aid his recovery. Zheng retired from teaching and devoted himself for several years to the study of tai chi chuan, traditional Chinese medicine, and literature. In addition to his childhood instruction, Zheng Man Qing received formal Chinese medical training. While he was teaching painting in a Shanghai art school, one of his friends grew ill and was unable to find relief.

In 1928 he met the well-known master Yang Cheng Fu, with whom he began to study Yang style Taijiquan, which he did until 1935. Questions have been raised regarding the lineage claims of Zheng Manqing and his relationship, if any, to Yang Cheng Fu. Zheng Manqing’s name is not included in the list of Yang Cheng Fu’s students and scholarly research regarding Zheng’s life has failed to substantiate claims that he was a student of Yang Cheng Fu for a time period of seven to ten years.

Rene Navarro in the article “In Search of Yang Cheng Fu” states, “I observed the famous Zheng Man Qing, who had a school at the foot of Manhattan Bridge on the Bowery in New York City. Zheng had a reputation as a formidable fighter. His short form of 37 movements was derived from the Yang Family classical fist form of 108 movements. It was said that he studied with Yang Cheng Fu, but I did not know what forms or for how long. At the time, there were articles that said he studied for a decade.

Later, a researcher estimated 3 years. More recently, Master Dong of Hawaii quoted his grandfather as saying that Zheng studied only for 6 months. Zheng, according to Yang’s son Zhen Ji, ghostwrote Yang’s second book “Essence and Applications of Taijiquan” or “The Substance and Application of Taijiquan” , for which Zheng also wrote a preface and most likely arranged for the calligraphic dedications.

Zheng taught Taijiquan, practiced medicine, and continued his art practice in Sichuan Province during the Sino-Japanese war years. By 1946, he had developed a significantly abbreviated 37-move version of Yang’s traditional form. He wrote the manuscript for his “Thirteen Chapters” during this period, and showed them to his elder classmate Chen Wei Ming, who gave it his imprimatur.

Zheng moved to Taiwan in 1949 and continued his career as a physician and as a teacher of his new Taijiquan form, as well as actively practicing painting, poetry, and calligraphy. He published “Zheng’s 13 Chapters of Tai Ji Boxing” in 1950 which has been translated into twice. He started the Shih Chung Tai Ji Association in Taipei, where many now well-known students trained with him among them Huang Xiangxian.

In 1964, Zheng moved with his family to the United States, where he taught at the New York Tai Ji Association at 211 Canal Street in Manhattan. He then founded and taught at the Shr Jung Tai Ji school at 87 Bowery in New York City’s Chinatown section, with the assistance of his six American senior students, known as the “Big Six”: Tam Gibbs, Lou Kleinsmith, Ed Young, Mort Raphael, Maggie Newman, and Stanley Israel.

Half a dozen later students/assistants are known as “the Little Six”: Victor Chin, Y Y Chin, Jon Gaines, Natasha Gorky, Wolfe Lowenthal, and Ken VanSickle. Other American students include Patt Benton, Robert Ante, Patrick Watson, Lawrence Galante and William C. Phillips. In Taiwan, Zheng’s students continued running the school in his absence. It operated initially under the direction of Liu His Heng. Hsu I Chung is the current director.

In 1967 in collaboration with Robert W. Smith, and T. T. Liang, Zheng published “Tai Ji, the Supreme Ultimate Exercise for Health, Sport and Self-defense,” which was his second Tai Ji book in English. He wrote over a dozen other books on a variety of subjects, including the I Ching, the Tao Te Ching, the Analects of Confucius, books of poetry, essays, medicine, and art collections.

Zheng Manqing is best known in the West for his Taijiquan. The following are some of the characteristics of his “Yang-style short form.”

1. It eliminates most of the repetitions of certain moves of the Yang long form.

2. It takes around ten minutes to practice instead of the twenty to thirty minutes

3. The hand and wrist are held open, yet relaxed, in what Zheng called the “Fair Lady’s Hand” formation

4. The form postures are not as expansive as Yang Cheng Fu’s form

5. Zheng postures are performed in “middle frame” style, which changes the movement of the feet from the Yang version.

6. Zheng’s concept of “swing and return” in which the momentum from one movement initiates the next. 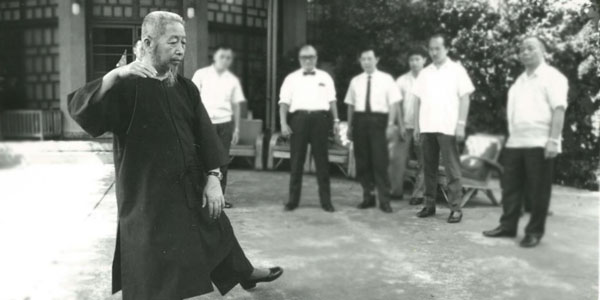