Huang Xiangxian (1910-1992) was born in 1910 in the Fujian province of southern China, and he died there in 1992 while visiting his native town. He left behind about 35 schools in Indonesia, Malaysia, Singapore, Australian and New Zealand with approximately 10.000 students.

At the end of the civil war in China he left mainland China and settled in Taiwan. The rest of his life he spent traveling and teaching – and continually refining his art. He was widely known and respected for his superior skills in push hands and combat.

As a child he developed an interest for the martial arts and at the age of 14 he became a student of Bai He Quan – Fujian White Crane. Having some of the finest teachers he excelled at this martial art and at the age of 18 he was already a skilled fighter competing in major tournaments. After he had settled in Taiwan he paid a visit to Zheng Man Qing, a renowned Yang style Tai Ji Quan master who was one of Grandmaster Yang Cheng Fus closest students, in order to test his skills.

In the following friendly bout Zheng Man Qing had no trouble matching Huangs Bai He Quan skills, and as such Zheng Man Qing was the first Tai Ji Quan Master to have bested him. Recognizing Grandmaster Zheng Man Qing superior level Huang asked for guidance and remained a student of his for the next 10 years.

In 1956 he was invited to open a Tai Ji School in Singapore by the chairman of the Chinese Christian Association, Lee Kuan Chien. In 1962 Huang Xiang Xian moved to Malaysia and founded a large school. At this school Grandmaster Huangs Tai Ji Quan is still taught by senior students. During the last 40 years of his life, Grandmaster Huang constantly sought to refine and develop Tai Ji Quan. He pointed out that Tai Ji Quan not is static, but is a living art and should be further developed through practice and analysis of ones practice.

Based on his experience he developed a complete training system with a systematic set of learning methods including the 5 loosening exercises. Grandmaster Huang emphasized the importance of building a firm foundation in the first years of studying Tai Ji Quan, consisting of good training habits and simple, but efficient exercises. This would be required before any real proficiency could be achieved.

His was a very gifted teacher, and he not only left a large number of students at the time of his death, he also left a large number of adept students who themselves became Masters. Whereas many Schools and Masters of Tai Ji Quan only emphasize the positions in the Tai Ji form, Grandmaster Huang also focused on the transitions in the form. Throughout his life he was modest concerning his own skills and very respectful towards Tai Ji Quan as an art form. He often stressed that you should never stop learning “As a teacher you are just a student who has been practicing a bit longer than a beginner”.

A selection of Grandmaster Huang quotations:
– “When you drink the water, remember who dug the well”
– “When you water the plant you water the roots and the blossom will come by itself”
– “Learn less and practice more” 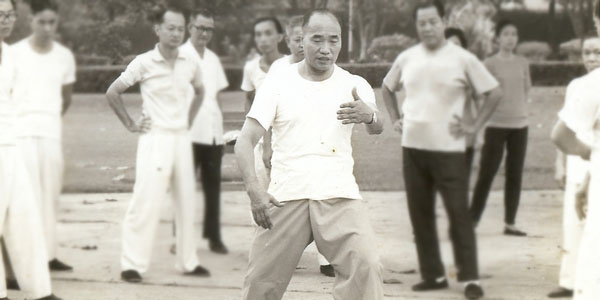