He Gong De (1926-1999) was born in 1926 in the city of Wuhan, Hunan province but lived for most of his life in Shanghai. When he was a boy he developed an interest in Wushu and he became an enthusiastic student of Nan Quan and Iron Palm Gong Fu.

As a young man he volunteered to the Goumindang forces in order to fight the Japanese invasion force. After the Communists had won the civil war in 1949 He Gong De moved to Shanghai, and a couple of years later he started taking lessons in Yang style Tai Ji Quan.

He practised Yang-style for many years and was a close practice partner and friend of Chen Weiming, one of the diciples of Yang Cheng Fu. When Chen Zhaokui,- son of Grandmaster Chen Fake,- started to teach Chenstyle in Shanghai in 1960, He Gong De was very impressed by his skill and changed for Chenstyle. He became a close an imtimate friend of Chen Zhaokui who taught him the Lao Jia Chen style and became a disciple for 20 years. By recommendations from Chen Zhaokui, He Gong De went to learn from Feng Zhiqiang, – one of Chen fake´s topstudents – for one year in 1977.

He Gong De had relative few students, because he primarily practised taiji out of his own interest, and didn´t have any intentions as to make it a living for him. Moreover he was a very modest man who did not seek to draw attention to his excellent fighting skills, or his profound knowledge of Wushu. In his later years though he decided to pass on his great experience to a few selected students, amongst them Torben Bremann who probably became his closest student. As a teacher he was very caring and patient and felt a deep responsibility toward the student and the passing on of Lao Jia Chen Style legacy. He died on the 28th of May 1999. 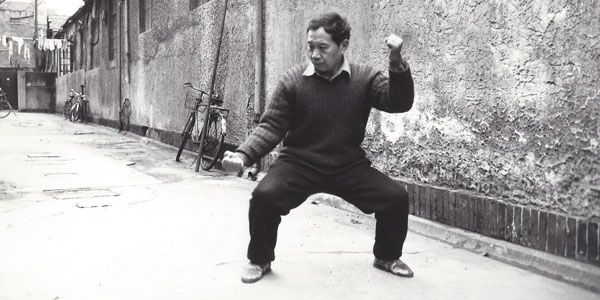